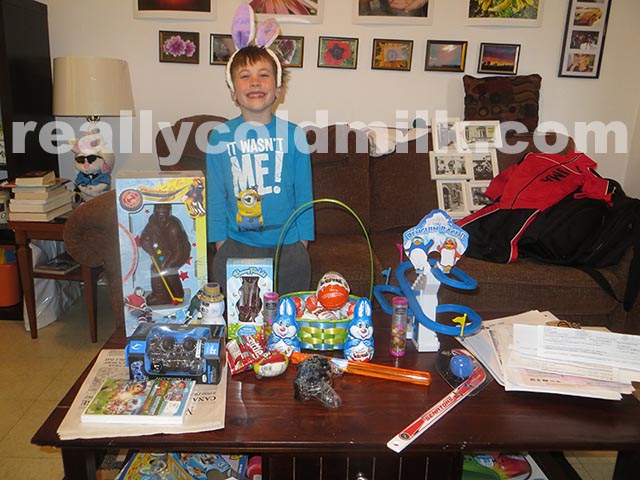 tl;dr: Heavy Metal (Animated — 1981): a movie about a green orb of ultimate evil with the coolest soundtrack ever. Also… that’s my oldest son at Easter. When did Easter become Halloween for lazy people?

‘Heavy Metal’ is the coolest animated movie ever produced.

It’s sectioned into an anthology, told in sequence by a little green orb called “The LocNor,” which is the manifestation of all that is evil in the universe. The segments, in order, are called “Soft Landing“; “Grimandi”; “Harry Canyon”; “Den”; “Captain Sternn”; “B-17 Flying Fortress”; “So Beautiful, So Dangerous”, and; “Taarna”. None of this makes any difference because two key segments were cut out which basically turned the movie into eight separate movies, each starring a green orb of evil. One of the segments, called “Neverwhere Land” — which included the Pink Floyd classic “Time” — was cut, ironically, to reduce the run time. The other segment was edited back because of a scene of a dude’s full frontal nudity. Despite the almost constant female nudity, sex and definitely constant violence and blood-letting, it was a dude’s limp dick which almost got this movie an X Rating.

As a result the movie, or at least the story and main plot, comes off as uneven and juvenile. Which probably would have happened anyway. But that’s not the point. The individual segments actually work as short films, the animation is cutting edge, the storylines — based on sex and violence — were almost completely unheard of in a mainstream animated movie, and the soundtrack… the soundtrack is, quite simply, a who’s who of Late 70’s Heavy Metal Music and a perfect example of how cool a soundtrack — at that point almost entirely limited to the Movie’s Score — could be. Among others, the music of Sammy Hagar, Nazareth, Blue Öyster Cult, Cheap Trick, Black Sabbath, Stevie Nicks and Grand Funk Railroad are all featured in the film.

Ironically, even more than the deleted segments, it was the music that doomed Heavy Metal to cult classic status. After its 1981 theatre release Heavy Metal always had a home on HBO and other movie channels however, a handful of legal fights over music licensing kept Heavy Metal from being released into the Home Video Market until about 1996. The same fights kept the soundtrack from being re-released on CD until 1995.

The movie is based on an American-based magazine of the same name, which had a Canadian publisher at the time. The animators came from America and Europe, but an equal amount of Canadians worked on this movie. Weirdly, the voice work was mostly done by members of the SCTV Improv Group. The Producers were Canadian and Canadian taxpayers money paid for most of the film and distribution… the animation, through the sequences, has different styles because several different animation houses were used to cut down on time and cost. Among animators Heavy Metal is considered to be a classic, and was the inspiration for “live action” movies such as the “Alien” franchise and “The Fifth Element,” as well as classics like “Akira” and “Bladerunner.”

Hanover Fiste: He never did anything that was… illegal… unless you count all the times he sold dope disguised as a nun.

Zeks: Look, man, if there’s one thing I know, it’s how to drive while I’m stoned. You know your perception is completely fucked so you just let your hands work the controls as if you were straight.

I used to like toast.
View all posts by Gabriel... →
This entry was posted in favourite movies, favourite things, movies and tagged Heavy Metal, movies. Bookmark the permalink.

The Emporium of Lost Thoughts

A little spot on the web to post longer thoughts on anything that catches my fancy...technology, art, writing, role-playing games, philosophy, and other things.

Vankleek Hill, my son and I all walk into a bar, and the bartender says...

Short and sweet cyber and crypto news for the whole family!

sometimes we need you to love us a little bit louder

A warehouse for my thoughts...
Dark Entries

Stray Polyps from the Internest

The sky is high. The Czar is far.

A wide angle view of India

The Perceptions of Someone with Several Psych/Neuro Disorders on Life: What Fits, What Sometimes Fits--And What Definitely Doesn't.

The Experimental Chimp is a depressive, sleep-inhibited monkey currently moving through the delightful UK mental health system. Will he get the help he really needs or will the doctors fail him?

Spin Me I Pulsate

Love has no need for memory.

A Blog for the Alcoholic & Bipolar Minds

Stories and More By A.M. Moscoso

In Her Own Words

The Art and Craft of Blogging